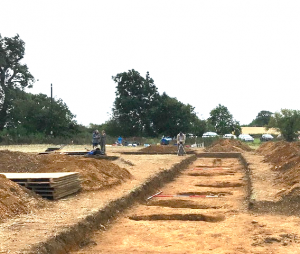 The 2019 fieldwork on the site of the Post Roman and Anglo Saxon burial ground at Whitehall Farm revealed the location of twelve new graves of which nine were excavated.

Most of the burials explored formed part of a linear row of graves aligned roughly on a north/south axis. This is consistent with previous excavated evidence indicating that the 5th century AD  interments were laid out according to a structured grid alignment similar to those recorded at Cannington, Somerset and Lankhills, Winchester.

Our current understanding of the grave locations is indicative of four or five linear rows containing between eight and ten inhumations per line suggesting the presence of a sizeable community within the locality and the probability that many more graves remain to be identified.

The position of the individual graves also appear to be evenly spaced along the row, respecting the overall pattern of the graveyard. Six of the inhumations associated with the row have a west/east alignment with their heads positioned at the west end of the grave and all of the skeletons being interred without grave goods.

One grave contained a young woman complete with perinatal foetus who had probably died in child birth; another contained a child, whilst yet another held the first instance of a deviant burial from the 5th century AD graveyard. Laid into the grave face down the skeleton was also minus its feet which may have been cut off prior to death. Two other skeletons of the same date were excavated with the position of their graves implying that they were lying in neighbouring rows of graves. One of these individuals was buried with a personal iron knife placed at the hip whilst the other was interred with a range of grave goods, suggesting a person of status. The grave goods include a spear, shield boss and a copper alloy strap end with associated belt clasps located on the hip and shoulder.

A further burial aligned north/south associated with late 6th to early 7th century interments was also excavated. This skeleton was male and had been buried with a spear and shield boss as had been recorded in the other burials of this date. It also demonstrated that potentially bodies from this period of interment can be found further to the north in the burial distribution than previously expected.